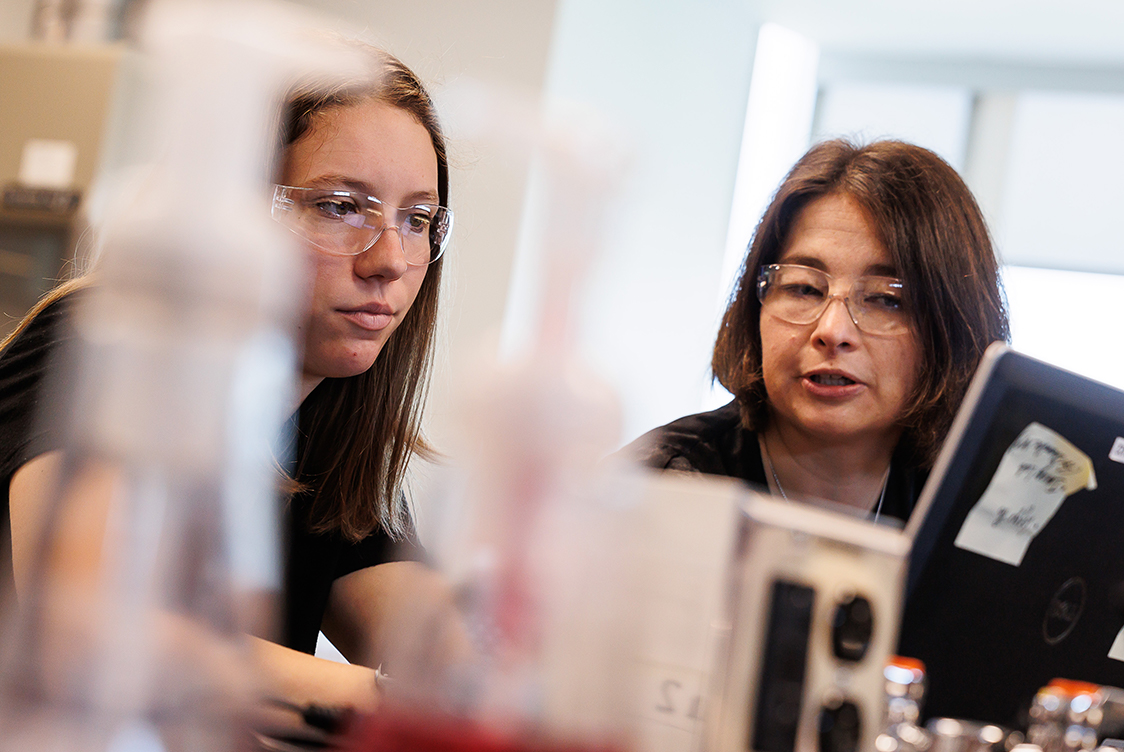 From her lab in the Sally Breidegam Miksiewicz Center for Health Sciences to Moravian’s annual Fall Fest, Anastasia Thévenin pours her heart into research, teaching, and fun with the campus community.

Where did you grow up, and did that place influence you in any way?

I was born in Tashkent, Uzbekistan, and witnessed the fall of the Soviet Union when I was 10. I remember the years of economic chaos pretty vividly. My parents, younger brother, and I immigrated to Richmond, Virginia, in 1997 as refugees when I was a sophomore in high school. My teenage years were heavily influenced by these events. I think about it a lot. I am the same age now as my parents were when they moved us half-way across the world with only four suitcases to a place we knew nothing about. Back then, without the internet and computers, one had to rely on printed encyclopedias. The one we had in our house told us: Richmond—the capital of the State of Virginia. A very green city.

What drew you to your academic discipline?

Proteins fascinate me (probably more than socially acceptable). Our cells are able to make about 25,000 different proteins and are very good at controlling when and how much of a particular protein to make. It is proteins that do most of the cellular jobs. It is often the issues with protein function that drive disease progression.

What are your research interests, and why are you drawn to them?

I am interested in deciphering protein-protein interactions in cells that lead to or prevent cancer. Namely, my lab has focused on identifying molecular events that take place between a tumor-suppressor protein, connexin 43 and a tumor-causing protein, Src. In many types of cancer, connexin 43 protein is not made while levels of Src are drastically increased. Connexin 43 is known to interact with Src in cancer cells and lead to a decrease in Src activity, thus lowering the rate of tumor growth. By bringing Connexin 43 back into cancer cells, we have gained a pretty good molecular understanding of how connexin 43 can regulate Src activity and are currently working on developing Connexin 43-based molecules to target Src activity in prostate cancer cells. I really love how this work progressed from its early days when I first came to Moravian in 2016 to where it is now. I incorporated significant parts of this work into my biochemistry II teaching lab, asking large groups of students to study Connexin 43 and Src interactions in the test tube initially. This allowed us to screen a large number of conditions and find those that led to the strongest interactions between these proteins. Several of my research students then confirmed these results in living cancer cells. Solving this molecular puzzle proved to be a great teaching and research tool for a large number of Moravian students, yielding impactful findings for the cancer biology field.

Due to our ability to work with mammalian cells, I have also been involved in a wonderful collaboration with Stephen and Shari Dunham [associate professors of chemistry]. Steve Dunham’s research students have synthesized a number of heavy metal compounds containing two rhodium atoms at their core. Shari Dunham’s students have been testing these compounds’ ability to bind to important cellular molecules, such as DNA and proteins in vitro (in the test tube). We have had several shared independent study and honors students who have tested these rhodium-based compounds in their ability to kill cervical vs. breast cancer cells. We have found that some rhodium-containing complexes are able to kill cancer cells as well and, in some cases, better than a known chemotherapeutic, cisplatin. Our collaborative work is currently focused on understanding where these toxic rhodium molecules end up in the cells: Do they get in and remain in the cytoplasm, or do they enter other organelles, such as the nucleus and mitochondria?

Are there any specific moments from your experience with students that stand out in your mind as special?

There are too many to list, and it is difficult to pick just one specific experience or moment. I love seeing students who really struggled initially find their niche and their passion, finish strong, and become successful after Moravian. It is so special to hear back from them and see how wonderfully they are doing and how much they are enjoying their careers.

Share something about yourself that people may not know.

When I was in middle school, back in Tashkent, I had to decide which foreign language to take.  I signed up for French. When I came back home and told my parents, they made me switch to English because they were planning to move us to the US. When I was finishing high school in Richmond, I signed up for French again but really struggled because I could barely speak English at the time. Little did I know that in graduate school, I would meet and eventually marry a French guy. After 17 years together, I finally prevailed; my French is pretty decent, and I am obsessed with anything French: food, wine, music, movies, you name it.

What is your favorite spot on campus?

The Sally Research Lab that I share with my colleague, Kara Movosky. This place is where I have the most fun with my research students. The atmosphere is very close-knit and collaborative, with the Mosovsky and Thévenin lab students helping one another, teaching each other new techniques, and just having a blast.  It is busy, noisy, exciting, homey, and peaceful all at the same time.

What is your favorite Moravian University tradition?

Fall Fest because I get to have fun with both my kids and my students at the same time. My sons are obsessed with the yummy chili, hot cider, and all the rogue farm animals munching on the flower beds on the academic quad.

What is your favorite thing to do with your free time?

Travel with my family. My husband and I love sharing the world with our kids. It is sweet to see them submerged in another culture, complete with its language, foods, and traditions.

Science meme.  Not only will I save it but will also show it to my students in class if it fits what we are discussing that day. My office door is full of them. I often have an online discussion set up on Canvas where students can share “relevant and clean” scientific memes.

Name someone who inspires you and tell us why?

My PhD advisor, Dr. Roberta Colman is my inspiration. I was her last PhD student, and we continued to keep in touch after I graduated. She passed away a few years ago, and I think of her often when I am in my lab doing research with students. She often shared stories of her years as a graduate student at Harvard, where she was the only woman in the biochemistry PhD program. In her highly successful career, she frequently encountered sexism in the workplace. She thus made it her goal to help elevate and support careers of women and underrepresented minorities in science and academia. Moreover, her positivity each time an experiment failed—and science experiments fail more than 90 percent of the time—was contagious. I catch myself channeling that same positivity with my own research students, and it makes me smile.