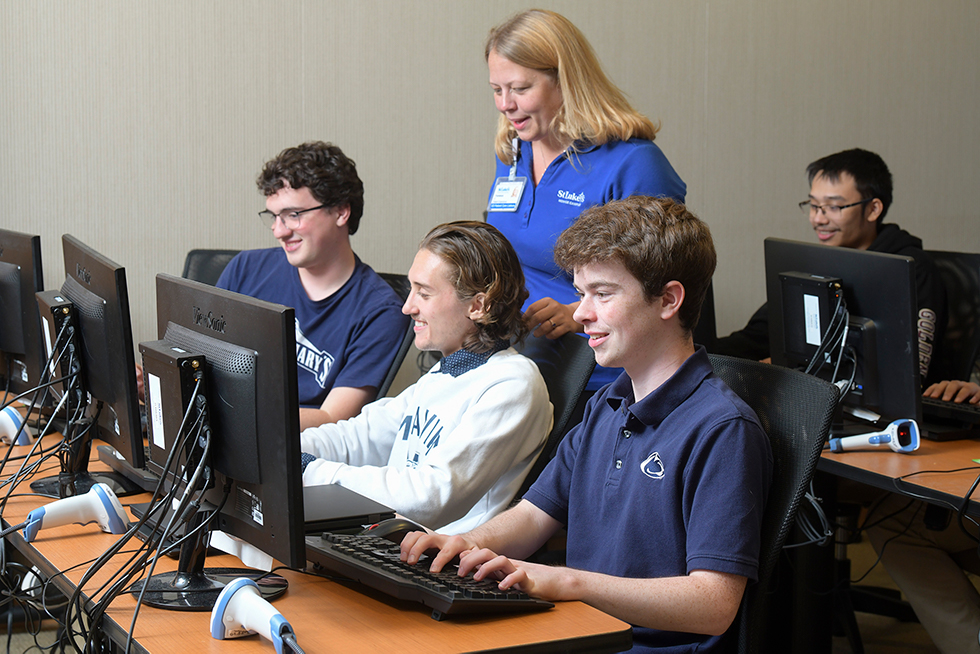 When Shane Houghton ’23 started his internship at St. Luke’s University Health Network in Fountain Hill, he expected to help an employee, shadow some scrum meetings, and maybe learn about some of the newest technology in the healthcare space. What he didn’t expect was to deploy a full working software application from start to finish, a program that streamlined some of the day-to-day operations of the distribution center. But during the semester he spent at St. Luke’s IT department, that’s exactly what he did.

“On my first day at St. Luke’s, they told me I was going to partner with another intern from Penn State Lehigh Valley to focus on a project for the hospital distribution centers,” says Houghton, who has a double major in Computer Science and User Interface Design. “What happens is this: The hospital asks the distribution centers for supplies—for example, 50 catheters—and the warehouse employees have to go find all those supplies and put them into bins,” he explains. Sometimes the orders are small, and sometimes they can be large. In either case, employees would have to write out all the bin labels by hand, which is tedious and time consuming. “So, we were tasked to create an application that would automate the bin label process for them.”

Within their first week and a half, Houghton and his partner had successfully written an application that allowed employees to print stacks of labels instead of writing them all by hand. “It turned out to be a very successful project; we surprised our supervisors because we wrote it so fast.”

But writing the software was only the first hurdle. “We weren’t able to employ the application right away because it required having an idle laptop on in the distribution center 24/7, where employees could log on to print the labels. In a hospital system, this is a big security no-no.”

So, Houghton and his partner worked with employees in St. Luke’s security department to create profiles and change settings on the device so employees could have constant access without breaking security rules.

From there, they continued to support the program by writing technical documentation, so the application could stand on its own once their internship was over.

Throughout the process, Houghton says, not only did he learn how to apply programming languages and algorithms to solve a problem, he developed soft skills—how to communicate with people in different roles to move the project forward.

“The internship far exceeded my expectations,” Houghton says. “It was one of the first jobs where I woke up and was excited to go to work. You think of computer science and picture employees sitting at a desk all day staring at a screen, but that wasn’t how it was at all. It was dynamic, and we were moving around and talking to other employees.” He also credits his internship partner for his enriching experience. “I got lucky; he was cool, and we clicked and worked well together.”

Houghton chose St. Luke’s for his internship because his mother, who works part-time and per diem as a nurse case manager and per diem as a nurse in the virtual response center at St. Luke’s, spoke so highly of the hospital system. “I know I could never stomach being a nurse, but I’ve always liked the idea of using computer science to solve real-world problems and help people, and I thought a healthcare system was an ideal place to do that,” says Houghton.

He adds that the culture at St. Luke’s gave him the freedom to handle the project as he saw fit. “We were encouraged to explore the problem on our own, to give updates, and then employees would give us feedback—it was an open, supportive environment, and everyone was super helpful.” Houghton enjoyed the internship so much that he hopes to work at St. Luke’s part-time during breaks. When he graduates in May 2023, Houghton says he hopes to get a job similar to what he has been doing at St. Luke’s, hopefully in a full stack role, where you develop software from the back end to the front end. “I want to be part of the backend and logic behind an application but also focus on the design, making it look pretty, so users have the best experience possible.”